It doesn’t get any more original than Devil City Angels.

Devil City Angels formed in June, 2014 with plans to tour all across the country.

This phenomenal super group promises an energetic, entertaining show with some of their multi-platinum hits blended with new, original material. This powerhouse draws new fans, along with the existing loyal fans of their combined projects, to love their electrifying performance and songs.

” I think people are really ready for just some pure fun rock” says Rikki Rockett. “We’re just here to rock” and they want the fans to do nothing but enjoy it! A finely tuned, guitar driven sound that also has a groove rock feel to it.

Right out of the gate, Devil City Angels released the rocking, upbeat song “All My People” followed by…

Under The Blue Door 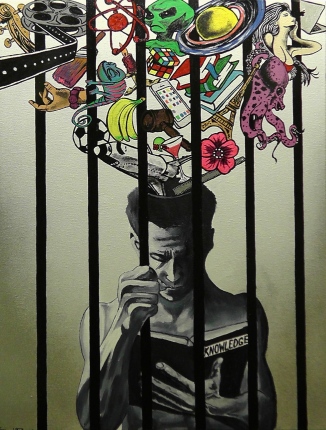 Solarpunk is a wonderful new genre conceived by Olivia Louise.

Okay, so I’m pretty sure that by now everyone at least is aware of Steampunk, with it’s completely awesome Victorian sci-fi aesthetic. But what I want to see is Solarpunk – a plausible near-future sci-fi genre, which I like to imagine as based on updated Art Nouveau, Victorian, and Edwardian aesthetics, combined with a green and renewable energy movement to create a world in which children grow up being taught about building electronic tech as well as food gardening and other skills, and people have come back around to appreciating artisans and craftspeople, from stonemasons and smithies, to dress makers and jewelers, and everyone in between. A balance of sustainable energy-powered tech, environmental cities, and wicked cool aesthetics.

Here are some buzz words~

The Introspective Ramblings of a Middle-Aged Doubter

The world is a slightly darker place this morning. We’ve lost a maverick, a pioneer,  a visionary. Often controversial. Often combative. Always brilliant! A literary mastermind was Hitchens. He could turn a phrase like none other. His mind seemed to be a Rolodex of information and life-experience that he had the ability to sift through and access any bit of information at any time and bring it to us in fabulous poetic prose.

As a part of the free-thinking, anti-religious movement he was invaluable. Loud and boisterous and yet always eloquent. He was a bright light of reason in an often dark ignorant populous. This is where I believe he will be missed the most.

I wish I could say I knew him personally, but through his writing I feel I had the privilege to get a peek into the machinery that was his thought process. I’m sure that his close friends and family are…

In an imperfect world, there is perfect opportunity for social good that stretches across borders and unites communities the world over. The best way to spreading a message, and creating social good, is to use the channels available from Facebook and Twitter to Instagram and Pinterest.

The platforms offer access to millions of potential supporters, and that’s the beauty of the social good movement. I feel that most campaigns have the best intentions, and I fully support the End It Movement which inspired this post.

For those of you that don’t know today, February 27, has been deemed Shine a Light on Slavery Day; an effort to put an end to a $32 billion industry that has trapped 27 million people. Of that number, two children a day are added to the statistic, and regardless of culture, background or lack of government concern, the continuation of sex trafficking and…

The Queen of Shovels.